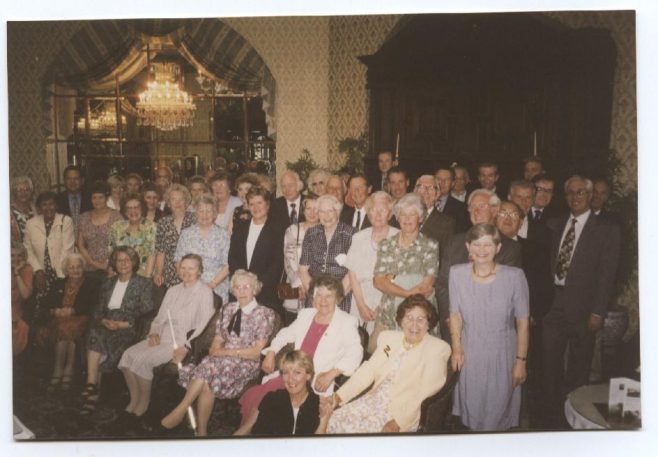 John Baggaley was for some time the Department Manager of China, Glass and Lighting.  Margaret Curtis was also a member of the lighting team. John Balleine had a very responsible job as Stock Keeper of China and Glass and also was responsible for fragile packing! Chris Hebden was for a while was also one of the China & Glass team but had many other responsibilities in other departments before she finally retired.

On the shop floor, Philip Lloyd was a Department Manager of Carpets.

Janet Gardner for many years has been the link with Retired partners and has been a Partner for over 40 years.

Hazel Francis loved her position in the Dress fabrics department, linked with this department, was the Haberdashery section where Joan Mills was a section manager. Miss Veronica Buckenham’s position was as sales assistant responsible for knitting wools.  Another member of the Haberdashery department, dealing with wools was Olive Turkentine. Peggy Shortley was involved with the Art Needlework side of the craft departments but had a change of work to be a clerk in the Perfumery department.

The Ladies shoe department was the workplace for Ruth Butler.  For many years, Margaret Caldecote was a member of the Gift department. Cynthia Yeo was also a sales assistant in the Gift Department.

The Department Manager of the Display Department was, for many years, Basil Carroll who was heavily involved in many of the Gala days and the planning of the Christmas Parties.  Working for Basil Carroll was Coral Gould who was section manager for some years.

Simon Cassidy spent most of his working years in the Partnership working in the yard where he was section  manager of the Porters,

From 1969 to 1977, Peter Miller was General Manager whose wife Pamela joined him on many of the 25 year club events. Chris Mitchell joined the branch in 1981 and was Managing Director until 1992,  then from 1995 to 2001, Simon Fowler was the Managing Director of the branch.

Behind the scenes, Sue Hood was the Manager of the Stock Accounting department and Sue Hooks managed one of the other office bound departments.  Another person who worked behind the scenes, was Audrey Walters who was the Secretary to the Service Manager and a very keen member of the Drama Club for many years.

Mrs Redgwell was usually known by her nickname, Reggie!

A section manager of Boys wear for some years was John Thomas.