You are here: HomenextRobert SaylenextEventsnextHistoricnextLife above Robert Sayle remembered by Frances Waterson 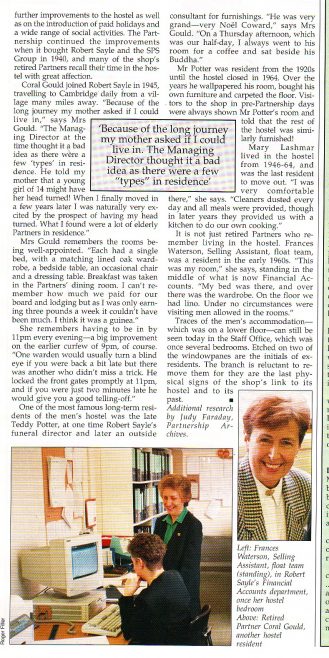 I lived in the hostel in the early 1960s. There were still strict rules.  Men were not allowed in a female’s room.  We  had to be in by 10pm apart from Saturdays when the night watchman had to be informed it we wanted to be in later.  We had keys to the back gate but after 10pm the main gate was actually locked and we had to ring a bell to summon the night watchman who wasn’t very happy if he was on his rounds.

We paid a small rent for the room and by this time we catered for ourselves in the converted kitchen.  Bedrooms were furnished with a bed, wardrobe, armchair and dressing table.  Rooms were heated by an electric fire run by a meter  which was fairly expensive for us.

Eventually the need for ’live-in’ accommodation dwindled and the last resident, Mary Lashmar, moved out in 1964 when the hostel closed.