You are here: HomenextRobert SaylenextEventsnextHistoricnextArticle about Life above Robert Sayle

Article about Life above Robert Sayle 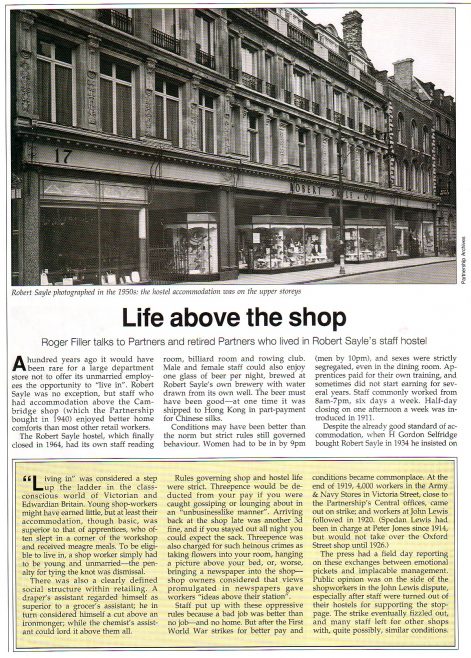 A hundred years ago it would have been rare for a large department store not to offer its unmarried employees the opportunity to ’live in’.  Robert Sayle was no exception but staff who had accommodation above the Cambridge shop (which the John Lewis Partnership bought in 1940) enjoyed better home comforts than most other retail workers.  The Robert Sayle hostel, which finally closed in 1964, had its own staff reading room, billiard room and rowing club.  Male and female staff could also enjoy a glass of beer every evening, brewed at Robert Sayle’s own brewery with water from its own well.

There were strict rules – women had to be in by 9pm and men by 10pm.  The sexes were strictly regulated with their own corridors and even in the dining room they were not allowed to sit together.  Apprentices paid for their own training and did not start earning for several years.  They worked from 8am to 7pm – six days a week.  Half-day closing – one day a week – was introduced in 1911.

Selfridges bought Robert Sayle in 1934 and made improvements to the hostel before the Partnership took over in 1940.