You are here: HomenextRobert SaylenextEventsnextHistoricnextTaken from the Gazette celebrating the 150th anniversary of Robert Sayle shop in St Andrew's Street 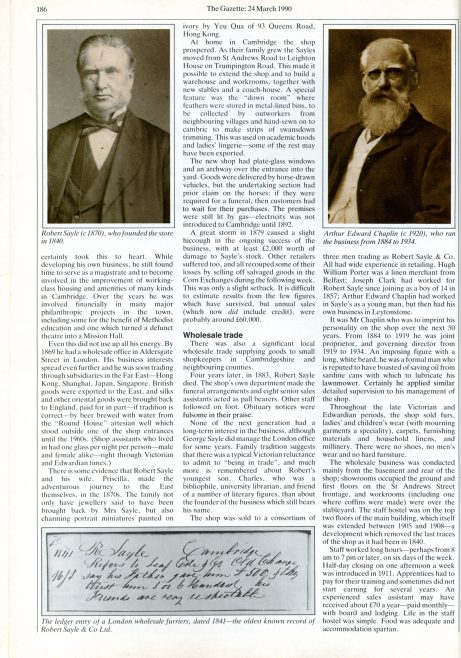 Robert Sayle, on the left of the picture, died on the 5th October 1883 of a heart attack at the age of 67.  He had made and signed a will previously when he had had a more minor heart attack in the September of that year. His funeral was arranged by the Store’s own Undertaker’s Department on 10th October and his grave can be seen in the Cemetery on Mill Road in Cambridge. The local newspapers of the time recorded that ’several thousand persons’ lined the route from Leighton House in Trumpington to the church of St Andrew the Great then after the service, to the cemetery in Mill Road.

In 1884, it was agreed that the store should continue with a group of Directors under the name of Robert Sayle and Co. with Mr A E Chaplin a Joint Proprietor with two others, this arrangement lasted until 1919 when Mr Chaplin became the Governing Director until 1934.  His photograph is on the right hand side of the picture.

Article from the Gazette the John Lewis weekly magazine (9)