You are here: HomenextRobert SaylenextEventsnextHistoricnextGeoff Howell recalls his memories of his time as a Robert Sayle Partner 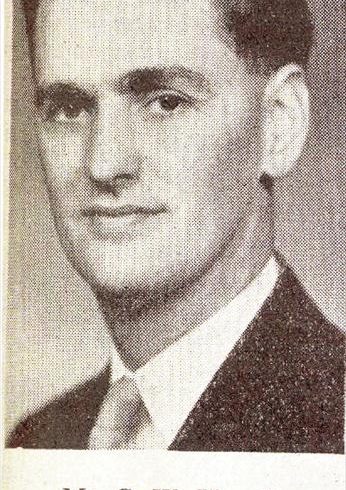 First, it is easy for me to remember that my joining date was 23/2/49 as it was exactly one week after the birth of my eldest son.    I had been interviewed by L.J . “Steve” Walsh, the Managing Director (He may have been General Manager then) and found that I had applied for a job intended for a woman..  That was the first of several happy “accidents” over the next 40 years. He offered me £6.50 a week, which was ten bob more than I was then being paid, so I jumped at it, and  was appointed Deputy Counting House Manager which, as a Department Manager, gave me the right to wear a “penguin suit” – black jacket and waistcoat and pin-stripe trousers!      I had no idea I was joining the Partnership, which I had never heard of.

Mr Walsh was very much the father of the branch and his encouragement and guidance was a major influence during those early years.   He had quite a lot to do with my standing as Branch Council President and also as Central Councillor – a job I shared with him.

During my six years in Cambridge I met many partners whose names evoke memories. They included people like the Fashion Queens – Olga Burnham and  ? Callaghan who, aided and abetted by Miss Housden the fashion workroom manager, ruled supreme over a large part of the first floor. Mr & Mrs Cooper ran the Soft Furnishing workroom. Bobby Howes was manager of Dress Fabrics – the largest department in those days.You have already featured Teddy Potter who would regale the coffee meetings with stories of his escapades as part time Funeral Director. Miss Brown combined her Department Managership with the job of  Secretary to the Committee for Claims.   And outstanding among the “backroom” people was Miss Taylor, the Despatch Manager who ruled her team with a rod of iron .     (Some Christian names elude me, because they were rarely used in those days).

Amongst the Management team were Miss Hunter (I think she was a relative of the Founder) who was succeeded by Miss Sieveking as Registrar, Chris Buckland the Staff Trainer and Derek Birch who was,I think, Staff Manager until he moved to our satellite at Peterborough shortly before it was burned down,

My first Counting House Manager was in the process of moving when I joined. He was followed by Col. Harrisson – a relative of the founder, and then by Denis Bayly. He and his wife occupied St Tibbs Cottage, an old house at the back of the shop. `

I recall a couple of special occasions.    One day there was great excitement in St Andrews Street when Queen Mary came to visit the antique dealers shop opposite us. We had a grandstand view from the first floor windows.

A much more important and nerve racking event was a visit by the Founder. In the days/weeks before his arrival plans were laid to ensure that the visit of the all-powerful and irascible Spedan went smoothly. Mr Birch was allocated the critical job of guarding the gents toilet, to see that no-one else used it!

And then there was our fire.   Thursday was half-day but two partners in Pay Office worked preparing the weekly pay packets. On this day I was one of them, when fire broke out in the hostel.  We evacuated and I spent some time sitting in the yard on a tin box containing the money!   Fortunately not a lot of damage resulted and we were eventually able to return to the office to finish the job.

One of the exceptions to fixed pay concerned the desk cashiers. (There were no tills in those days) They received a weekly bonus of five shillings less any shortages in their takings.   It was rare for any of them to miss getting the full amount !

The weekly arrival of the Gazette was an event on its own. No pictures of course. In the main it carried long articles by the Founder. And if any partner – no matter how senior – had transgressed then their sins were cruelly exposed as a warning to those of us who remained. I particularly recall the loss of money from a selling department at Oxford Street which resulted in the Gazette carrying the statement that  the Department Manager had been disciplined and if the Managing Director and Counting House Manager cared to offer their resignations they would be accepted!

It was during my period at Cambridge that I received my first Patnership Bonus. 4% of my salary  (in shares) was hardly a fortune but it was yet more tangible evidence of the difference between us and employees of other businessses.   And then, by a second happy accident in the summer of 1955, I moved to London.  More moves were to follow until 1988 when I ended up here in St Ives. But that’s another story.