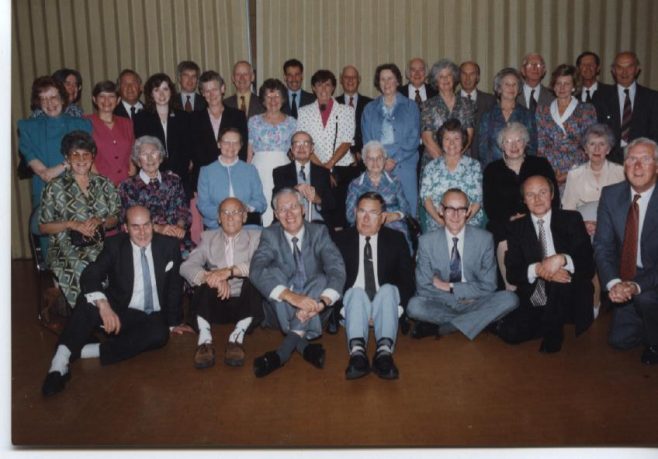 Tom Caldecoat was a carpet fitter, Basil Carroll was a keen organiser of Gala days and Christmas parties but his post was Department Manager of the Display Department.  For some of his time at Robert Sayle, Simon Cassidy was section manager of the porters.  Harold Diver worked in the Furnishing Fabrics Department and was for some time one of the section managers. Joan Franklin also worked in the Furnishing Fabric Department but as clerk in the office. Coral Gould, a very elegant lady, worked in the display department for some time.  Chris Hebden had worked in other branches of John Lewis having been connected with the branch where her parents worked.  She was, for a while, section manager of China, Glass and Lighting.  She held several posts after her first retirement, being one of the Partners who retired several times!  Jennifer Hutchings was Robet Sayle Registrar from 1991 to 1997.  Mary Lashmar worked for some time in the Counting House as section manager. Phillip Lloyd was a department manager of the Carpet department.  Mr Peter Miller was the Managing Director from 1969 to 1977, he attended these lunches with his wife Pamela. Another Peter but this one, O’Ryan followed in 1977 as Managing Director until 1981.  Jean Seekings worked in the Cash Desk. Another Jean but this one was the wife of Lewis Smith who was General Manager of Robert Sayle for a while. Michael Starns worked for some time in Furnishing Fabrics, Carpets and Linens. Jeanette Stevens took the post of Occupational Nurse for the branch.  OlveTurkentine worked in the wool department.  Audrey Walters was a well loved member of the Robert Sayle Drama club but was also the secretary to the Service Manager.