The acquisition of Thompsons 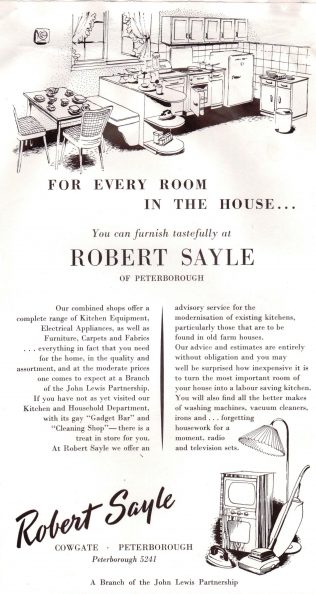 Mr Cornelius Fortune Thompson came to Peterborough in 1889, and started his business as a draper. Early successes meant that the shop, Thompsons, moved to the corner of King Street, where the business would remain until the 1950’s. In 1919, after twenty years of excellent trading, the business was eventually purchased by American businessman Gordon Selfridge, as part of his Selfridge Provincial Stores (SPS) group. The SPS venture started to run sour during the 1930’s, and Selfridge eventually decided that he no longer wanted his provincial stores. Thompsons was bought by the John Lewis Partnership. It joined 15 other acquisitioned branches of the SPS in giving the Partnership vastly increased coverage of the United Kingdom.

At the time of being taken over, Thompsons was in a state of decline. With an annual turnover of £33,443, it was the worst performing of the Partnership’s new stores. In one episode, vacuum cleaner sales were shown to have fallen by a staggering 94.23% in one week! In 1941, Thompsons became a branch of Robert Sayle, the department store in Cambridge that had also been purchased by the Partnership.