Aquisition and the War Years at Cole Brothers 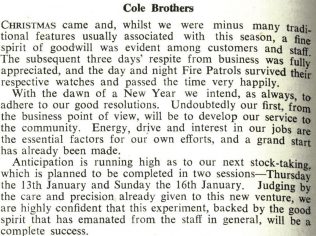 zoom
This highly informative snippet from 1944 is a wonderful insight into the attitude of the Partnership throughout the war years. A strong emphasis has clearly been placed upon carrying on in the face of struggle. Efforts are clearly to be concentrated on bettering the company, looking beyond measures of austerity in order to ensure future prosperity.

When the Second World War broke out in 1939, Cole Brothers catered for the general market by selling wartime essentials, including gas mask carriers and blackout blinds.

Takeover of the SPS group

Initially however, war had little impact upon the shop. In fact, it was the 1940 collapse of the SPS group and the takeover by the John Lewis Partnership that was causing the stir. The Partnership immediately requested that the considerable sporting facilities owned by Coles, be investigated. A sports ground at Tom Lane had been purchased by Cole Brothers in 1930, and the Partnership put it to use, holding galas and other events, until it was sold.

By 1940, the demands of war were slowly beginning to take their toll. As well as losing Partners to service, the shop also had to operate without gas on occasion. Some partners were driven to baking potatoes on the flat roof! All around them, the Cole Brothers competitors suffered in the horrors of the blitz, but through a minor miracle, the biggest department store in Sheffield came through unscathed. Like other branches, the shop contributed to the war effort wherever possible. As the extract below shows, they provided essential clothing to officers at immediate notice!

Throughout the war, the partnership asserted the importance of continuing to work for the company. Partners not in service were frequently reminded of the significant role they were playing at home. Although not as obvious, nor possibly as glamorous as fighting on the front line, continuing to work in such adverse conditions was a fantastic way to stand up to the enemy.