Aquisition and Wartime at Caleys 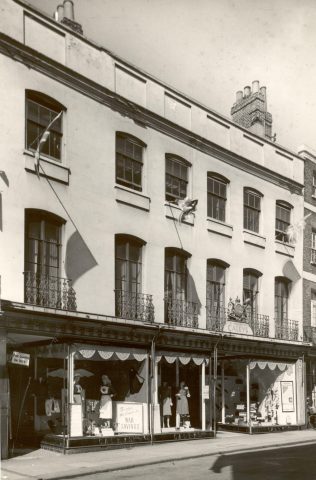 In the Gazette of 3rd February 1940, the Partnership announced its intentions to take over 15 former SPS stores, including Caleys. The Second World War had not put the Partnership off its quest to launch in the provinces. In 1943, Caley’s expanded, as the next door Wagland’s jewellery business was acquired. It was rapidly turned into a brand new Shoe Department and Counting House.

Thankfully, Caleys avoided many of the horrors that beset some of the Partnership’s other branches. Undoubtedly some wartime hardships still found their way to Windsor, rationing and the rigours of the likes of active service still determined much of the store’s output during these years. War-time life in Caleys was shaped by prevailing conditions. Fire-fighter training was provided for the ‘live-in’ Partners, obviously in preparation in case the worst should happen. Access to resources was restricted, and strict rationing was also enforced.

Fortunately, nothing untoward was bequeathed to Caleys, and the War would eventually pass.