Acquisition and the War Years at Bon Marche 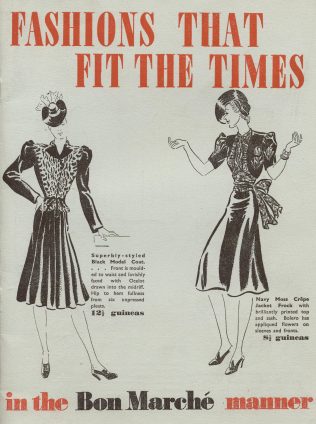 zoom
From a Bon Marche catalogue, 1941

At the beginning of 1940, along with the rest of the Selfridge Provincial Stores, the Partnership bought Bon Marche, Quin and Axtens and Pratts. The three had a combined turnover of £969, 644. Trading was not easy during the war. However, Bon Marche did capitalise on the bombing of John Lewis at Oxford Street. Sales of amenities and air raid essentials surged as the local population sought to protect themselves from the worst. In May 1941, Brixton was the unfortunate recipient of its own bomb. Quin and Axtens was destroyed, and much of Bon Marche’s main building was gutted. Some departments took weeks to recover, and the top floor was to remain unusable for ten years. Despite these considerable set-backs, Bon Marche took in Quin and Axten’s Partners, and by January 1942. Trading had equalled the combined sales for both shops from the previous year, and Bon Marche sat at a heady third place in the trading table.

Sinking in the Post-war mire

The last few years of the War were tough indeed for Bon Marche, however in 1944 the piece goods department achieved a record figure of £1000 sales in one week. In the post-war years, progress was slow and cumbersome. Some essential building work needed to take place to restore the shop and its Quin and Axten premises to their respective former glories. A license for any building work to take place was not acquired until 1951, and even then this only allowed for the most basic of repairs to the bomb damage that occurred ten years earlier. At the very least though the hole in the building was covered up!

The 1950’s and 1960’s was a conveyor belt of alterations and improvements in the branch. All departments were eventually brought under one roof (at one time in the 19th century, departments had been dotted throughout Brixton), and in 1956 Bon Marche got its own Partner dining room. Further minor alterations were carried out in 1966. But by and large, the main store which was by the 1970’s being threatened with closure, had remained the same since its original construction in 1877.