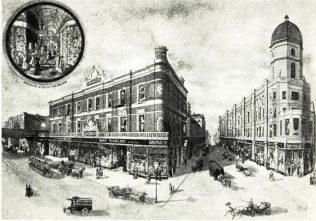 zoom
Bon Marche in its early days. Comparisions with photos from the seventies show how little the original shop changed

Bon Marche Brixton was not like other stores. It was not built as part of a wider plan, and was constructed an on apparent whim, by its first owner James ‘Rosebery’ Smith in the year 1877. After it changed hands in 1892 to some far more responsible owners, the store went from strength to strength and was taken over by the John Lewis Partnership in 1940. Eventually, as the Partnership’s programme of expansion soldiered on during the 1970’s, the need for the Brixton shop steadily evaporated. Bon Marche was closed in 1975.

James Smith of Tooting had no apparent desire or intention to build a department store. A printer by trade, Smith was also a proprietor of the Sportman newspaper. He owned a racehorse called Roseberry. In 1876, Roseberry won an almost inconceivable double, by scooping the Cesarewitch and Cambridgeshire Stakes at Newmarket. The prize of £80,000 funded the construction of James ‘Roseberry’ Smith’s foray into commerce, a department store in Brixton which he was to call Bon Marche.

Although based on the original Bon Marche in Paris, the Brixton model was unusual in that it began as a department store, rather than as a small shop that later expanded. Smith certainly did not hold back, an article in The Builder estimated that the building had cost him £70,000, millions in old money, The shop eventually opened in 1877. In 1880, Smith went into Partnership with a Mr Saunders. The only indication to shop life that we have is that the store operated a strict ‘ready money’ principle, although apparently the store ran a post-order trade, which guaranteed to open every order and despatch the goods within one hour! It appears that despite high hopes, Smith far overestimated the need and desire for his store in the local area. For the next we hear of him is in 1892, in the Bankruptcy Court, with debts totalling £71,000.

No early pictures of the owner survive in the archive. If you have any pictures you would like to share with us, please feel free to post them below.