Acquisition and the war years at Pratts 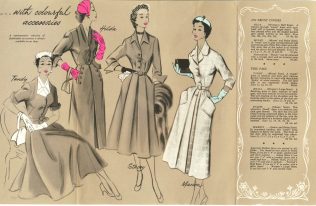 zoom
Pratts publicity from just after the War

A nice fit into the Partnership

With the tough economic conditions of the 1930’s and the outbreak of war in 1939, Selfridge relinquished its control of the SPS’ to the John Lewis Partnership in 1940. Pratts, along with 15 other provincial stores vastly expanded the Partnership’s empire. The Gazette of 21st March 1940 declared that:

Preparing for the future

Although the war stilted any significant progress as a result of stifling restrictions on resources, facilities and food, a few changes occurred at Pratt’s in order for it to cope with the demands of the Partnership. For example, in 1941 the hostel that had resided above the shop for a number of years to house employees, was closed down in order to create more space. Such a move was facilitated in order to both modernise the store, and make to make early preparations for post-war progress and expansion.

A sense of community during tough times

Situated just outside the prime bombing targets of central London, Pratts was fortunate enough to avoid much of the viciousness of the Blitz. Instead, the store was at the centre of frequent and well attended community funding initiatives. Social events were designed to raise both morale and much needed capital and resources for the war effort. ARP teams, Free French soldiers and merchant seaman were all guests of honour at branch social events. Considerable funds were also raised for parcels for serving Partners. In response to the ‘Wings For Victory’ appeal, nearly £500 was raised. Pratt’s was furthering its status as the beacon of the local community, guaranteeing loyal and happy custom for years long after the War.