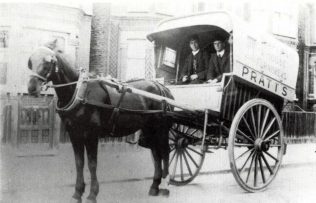 In 1912, major rebuilding was undertaken, and in the same year became a limited company. Pratts Ltd had by this time hugely expanded its range, and now boasted departments in Home Furnishings, China and Glass, Removals and Warehouse, Funerals and others. In 1920 however, the family business came to end, as the shop was purchased by local rivals Bon Marche of Brixton. Only six years later Bon Marche together with its subsidiaries was taken over by Selfridge Provincial Stores (SPS).

Gordon Selfridge and the SPS

Gordon Selfridge was an American businessman, who at the time of taking over Pratts in 1926, had been head of the well known store Selfridges of London for ten years. Selfridge turned Pratts into one of his Provincial stores, part of Selfridge Provincial Stores Limited, also created in 1926.

The management of Pratts was turned on its head by the takeover. Selfridge management made the move to maximise selling space and potential. Additional space was found by building over the remaining land at the back of the shop. The shops’ old stables disappeared. Advertisements, special promotions and sales were held on a regular basis. Famously, Selfridge was remembered to send out signed photographs of himself at Christmas with the words ‘There’s no fun like work’ printed underneath!, a neat summation of everything that he stood for!

Always prominent in the public eye, it was a well documented post-marital scandal that would eventually contribute to the downfall of the Selfridge Provincial Stores, and the subsequent takeover of John Barnes and others by the John Lewis Partnership in 1940.