The Acquisition of Blinkhorns, Gloucestershire 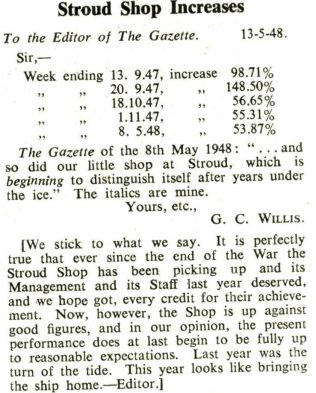 zoom
High hopes for Stroud, which until recently had disappointed the Partnership

Blinkhorn Ltd was a small department store in Gloucester, with a branch of the shop situated in Stroud. It was one of 16 branches that joined the Partnership as a result of the acquisition of the Selfridge Provincial Stores Group (SPS) in 1940. Information on Blinkhorns is of limited availability in the archives, principally because the shop lasted only 13 years in the Partnership before it was sold on. Therefore, if you have any further information on Blinkhorns during its years in the Partnership, please feel free to comment below.

Like the rest of the SPS group, Blinkhorns joined in the midst of the Second World War, enjoying a turnover in 1939 of £79,480. Although the principal shop was to be found in Gloucester, Blinkhorns also had a branch in Stroud. The Stroud branch began trading in its own right in the years following the war. Although the post-war years were unanimously tough for the branches of the Partnership, there was clearly a prevailing fear that Blinkhorns would struggle to keep up with its counterparts; such was the small nature of both branches. The letter to the Gazette from the 5th June 1948 laid out below, communicated the recent increases experienced at the Stroud branch. As the reply suggests the Partnership was slightly sceptical, and yet no doubt hopeful that these increases were the beginning of something great.