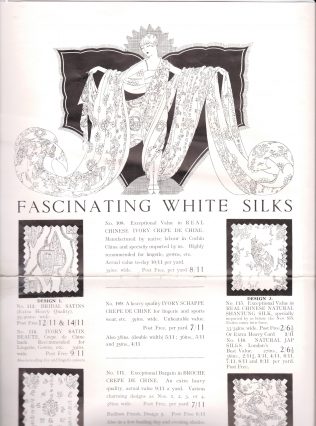 By 1925, John Spedan Lewis was very anxious to bring a touch of the exotic to Peter Jones, and he clearly hoped to extend the shop’s range with specialist carpets and curtains brought in from the East. Spedan felt that he had found the perfect candidate to undertake a buying expedition to Asia, a Miss F Lorimer. Lorimer was a friend of Mrs Lewis from their time together at Somerville College, Oxford, and significantly, appears to have been an acknowledged authority on oriental artefacts, with a specialist interest in rugs. The emergence of Lorimer was also timely, for Spedan was highly keen at this point in time to attract woman graduates to the Partnership.

Put to the committee

Spedan put his idea to the Peter Jones Economy Committee in 1925 in his capacity as Merchandise Director. He urged the members to support his proposal that ‘a total sum of…£300…be voted for the remuneration of Miss F Lorimer’ to pay her for her services over a 12 month period starting on the 1st March that year. According to Spedan, her purpose would be to travel to Asia in order to buy

Carpets and other goods on the frontier of India and at other point which one or more Asiatic as well as European middle-men would be cut out.

Despite making clear his opinion to the committee that the experiment would work, in the end only Mrs Lewis supported it. The proposal was defeated. Undeterred, Spedan took the decision to fund Miss Lorimer’s trip himself! In due course, Miss Lorimer was brought into the Peter Jones fold, and in a series of memos written in June and July 1925, was briefed by Spedan on how to approach her buying mission in India.

According to these memo’s, she was encouraged to investigate numdahs (embroidered Indian felt rugs), bedspreads and semi precious stones. Equally, she should avoid furs altogether and buy rugs on a singular basis. Shawls, coffee tables and baskets could be sourced in the Punjab, and could Spedan please have some owls and humming birds for his own collection!

Merchandise began to filter its way back to the UK from November onwards. Around this time, Spedan ordered that a special a of the ground floor at Peter Jones be cleared to receive the stock as it came through.

However, when Miss Lorimer returned, she was told to sell her stock to museums and other parties, as it seems that customers were less enamoured with the oriental goods than Spedan Lewis had premised. A further buying trip scheduled for 1927 was also cancelled.

The lasting impact of Miss Lorimer

After being offered a permanent post at the British Museum soon after getting home, Spedan countered the offer with a permanent position for Lorimer at Peter Jones. By September 1926, she had become the Buyer of Foreign Carpets. Sadly however, she left the business in 1932. Despite only seven years in the Partnership, Lorimer’s influence was destined to be far longer lasting. Customers can now buy products from all over the world, and designs and pieces influenced by Lorimer’s work can still be bought in-store today.