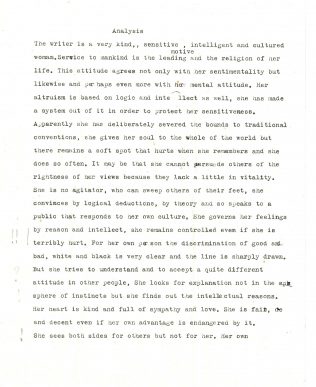 For a brief period, from 2 March 1943, the Partnership engaged, on an experimental basis, Dr Margaret Pauli as a graphologist.

Born in Austria on 11 December 1888 Pauli gained her PhD from the University of Vienna. Her slim personal file, preserved in the Partnership’s archive, indicates that she spoke German, French, Italian and a little Spanish, Danish, Norwegian and Swedish. She also had knowledge of the history and practice of palmistry.

Dr Pauli had carried out regular handwriting analysis for Unilever in Germany over a period of nine years before the Second World War. A poignant note on her personal dossier under the subheading ‘Nationality’ describes her as “Austrian – a refugee from Nazi oppression”. She arrived in the United Kingdom on 26 August 1939 days before the outbreak of war.

Spedan Lewis heard of Dr Pauli and her work via the wife of Sebastian Earl, Director of Selling at Peter Jones. His interest in the application of graphology in business seems to have stemmed from experiences related to him by his brother Oswald and a book review he had read on the subject. He was keen to meet Dr Pauli and she was invited by Spedan and Mrs Lewis for tea at Leckford Abbas in Dec 1942.

Spedan’s idea was for a self-supporting Graphology department which would answer demand from the general public and the business. His intention was that Dr Pauli would be attached to the Personnel department and would analyse the handwriting of applicants as an aid to recruitment and selection and also samples brought to her by customers of Peter Jones.

In spite of concerns about libel interpretations of handwriting, voiced by the Director of Selling, Dr Pauli was given a start at Peter Jones initially for a month. This period was reduced to three weeks and Dr Pauli was discharged with a reference which described a courteous, industrious and sober, specialist with a thorough understanding of her subject. The reason was that too few handwritten letters were received to keep her fully employed. This was attributed in part to the abnormal state of the Wartime labour market. In any event this particular experiment had not proved successful.