Peter Jones, the Partnership and the War Years 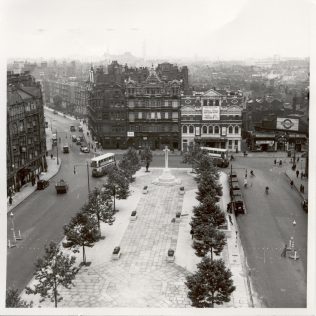 zoom
Sloane Square as seen from the rooftop of Peter Jones, 1937 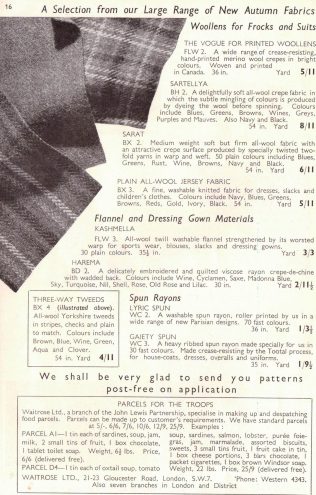 zoom
A page from a Peter Jones catalogue advertising the sending of parcels to troops through the Partnership's newly acquired food retail devision, Waitrose, 1939-1945

After the completion of the new Peter Jones building, Spedan Lewis began to look past his London shops, and instead focused on spreading the Partnership outside of London. This experiment was started in 1933, with the acquisition of Lance and Lance in Western Super-Mare, and Jessops of Nottingham. Knight and Lee and Tyrrell and Green, of Portsmouth and Southampton respectively were purchased in 1934.

The breakthrough came in 1940, when the Partnership acquired the Selfridge Provincial Stores (SPS) group. 15 new stores now belonged to the Partnership. As well as including several shops based around the country, it also included several large department stores in London. This included Bon Marche, Jones Brothers and John Barnes. With the Second World War underway, the purchase of the SPS stores secured the future of the Partnership, and meant that should the worst happen, the Partnership could pull through.

On the 18th September 1940, John Lewis on Oxford Street, the Partnership’s flagship shop, was totally destroyed by an oil bomb. The credentials of the SPS stores and Peter Jones were immediately put to test.

As further branches of the Partnership fell to German bombing, including Knight and Lee, Tyrrell and Green and Lance and Lance, Peter Jones stood defiant. It survived the war entirely unscathed, and traded well considering the many restrictions placed on retailers during this period. In fact, it often capitalised on new business generated by the destruction of local competitors.