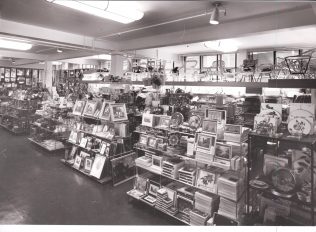 zoom
A photograph of the gift department, taken in 1972 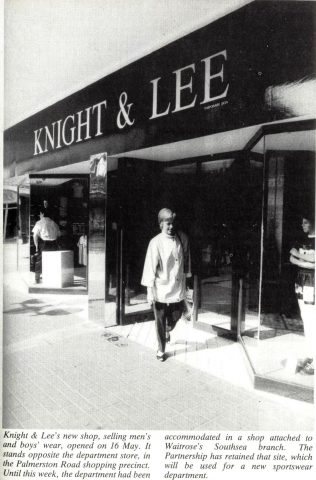 zoom
The Gazette details the opening of a brand new Knight and Lee Menswear shop, which was now located opposite the main building of Knight and Lee

By the 1960’s, Knight and Lee was once again enjoying considerable prosperity. In 1961, the Menswear department which was still separated from the rest of the shop, enjoyed a substantial and fantastic rejuvenation. The results were a physical embodiment of the shop’s focus on modern retailing.

The 1970’s began with some good news for the store, who since opening had been struggling for space. An entire re-shuffle, triggered by the closing of the Hairdressing department, allowed certain sections to expand and for new Partner training facilities to open. Further space was also guaranteed in 1971 as some of the workrooms in the shop were moved out. By October 1972, a warehouse had also been purchased.

By the end of the 1970’s, a new Waitrose, the John Lewis Partnership’s food division, opened in Southsea in July 1979. By February 1980, it was decided that the Knight and Lee’ ‘Menswear’ department should open next to Waitrose, as this location was only 2 minutes from the main store.

On the 7th January 1984, Knight and Lee celebrated 50 Years in the John Lewis Partnership. It had a past full of twist and turns with more success than failures. However, eyes remained set on the future. Menswear had moved again by the end of the decade, this time to stand exactly opposite the main building of Knight and Lee. Core determination and multiple relocations had finally brought the two stores face to face!