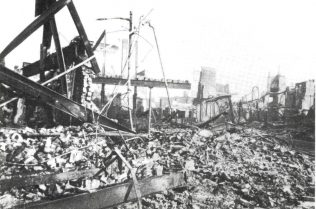 zoom
A photograph depicting the smouldering remains of Knight and Lee, 1941

The South of England was obliterated during the Second World War. Portsmouth was a prime target for enemy attacks, as a fully functional naval base and the location of several important factories. In view of the risk to customers and to the business, there was an early proposition to close down Knight and Lee during the war, although this was never followed through.

Upon the outbreak of the war, swathes of Partners from Knight and Lee left the business, most in the Navy reserves. This was just the beginning of a highly turbulent period for the store. From 1940 onwards, the South coast was hit constantly with German bombing raids. In a raid during 1940, part of Knight and Lee was damaged. Undeterred the store continued to trade, and by September had re-opened again. This jubilance was short lived however. On the 10th January 1941, the entirety of the shop was burnt to the floor. Fortunately there were no casualties. As for the business, it was in literal ruins.

With the whole building razed to the ground, normality was suspended. Partners were given two weeks leave on full pay, whilst the management worked out exactly what they should do. With a lack of a cash office, and the pay record simply dust on the floor, Partner’s pay was done entirely from memory!

Remarkable display of courage and will

As alluded to above, the shop’s offices were transferred to the Queen’s Hotel, Southsea. From here, the rebuilding of a business had to be undertaken. There was no hanging around. In a display of fortitude that expressed a determination not to be beaten, business started again on the 24th February 1941. Admittedly on a far smaller scale, it was conducted on the Palmerston Arcade nearby. Along with a few further premises on neighbouring streets, this is how Knight and Lee remained until the end of the war in 1945.