The construction and opening of Knight and Lee 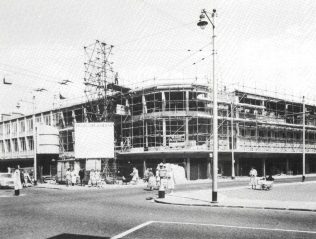 zoom
The rebuilding of Knight and Lee, in its later stages 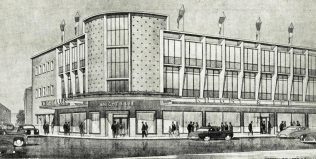 zoom
An artist's impression of the new Knight and Lee shop

In the Gazette dated 29th October 1955, it was announced to Partners that a new building had been acquired on the corner of Palmerston road, which would house the new Knight and Lee premises.

Vast ranges to be available

The new shop would sell Piece Goods, Hardware, Bedding, and Stationary, Leather Goods, amongst other things. In addition to these new premises, Knight and Lee opted to continue to trade in four of its current shops. These four shops would hold a number of departments, including Fashion and Casual Wear, Baby linen and Childrenswear, and Men and Boyswear. This way, the store could continue to offer all of its existing services without having to compromise.

The brand new Knight and Lee was opened on the 24th September 1956, 15 years after being burned to the ground. On the previous weekend, havoc had ensued as there was a rush to get everything ready, and stock flittered between three sites. Finally, at the end of a very successful first day’s trading, the celebrations commenced.

The new shop was a grand affair, an ocean from the shop of the 1930’s. The new premises were completed in their entirety in 1959. Many of the exiled departments had by this point come in from the cold. The only department to remain apart from the main store was the ‘Men and Boyswear’.