Determination gets shop back on track

The years after the war were highly testing for Knight and Lee. It is indeed almost impossible to imagine how it must have felt to witness one’s entire livelihood burn to the ground. And so, we can but marvel at the resolute determination inherent within the Partnership, to continue on as was best possible.

Knight and Lee had moved to Palmerston Arcade, and from there it began the ardent process of re-establishing itself. Sales had unsurprisingly plummeted, but finances were at least such that further premises could be added to the Knight and Lee portfolio. In 1946, a block of shops next door to the Palmerston Arcade chop became vacant and were bought in order to house Furnishing Fabrics, Piece Goods, Carpets and Household Linens departments. In the same year, a shop on the corner of Elm Grove was rented for Men and Boys Wear. In 1947, another shop in Elm Grove was rented, and would become the Hardware, China and Glass Department. By the 1950’s, Knight and Lee was trading out of ten shops. 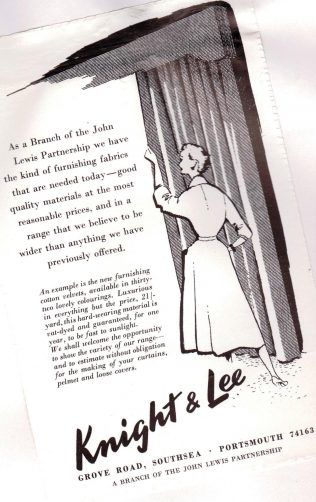 A Knight and Lee advertisement, dating from 1953