zoom
A local Hampshire tram, travelling down the A3 to Waterlooville, with a Knight and Lee advertisement adorning the side 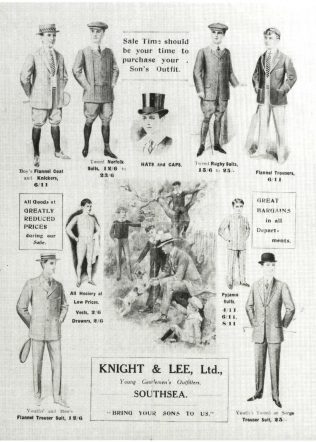 zoom
A page from a Knight and Lee summer catalogue, advertising the summer sale

By the early 1900’s, Knight and Lee was doing very nicely. In 1908, they bought a fishmonger’s shop on the corner of Stanley Lane and Palmerston Road. In the years following they expanded shop by shop until eventually a considerable distance of Palmerston Road fell under the Knight and Lee umbrella. Innovative marketing strategies for the day were employed to boost business, including advertising on the local Hampshire tram.

‘Knight and Lee was a popular and happy place to work. There was a waiting list for potential employees; such was the appeal of working there. Current employees lived in-shop on the top floors. In 1910, the row of houses on Palmerston Road were rebuilt, further evidence of the ample money and resources available.

The Partnership purchases the business

When Mr Knight died in March 1922, and his partner Lee just two years later, they left behind a successful business and a grieving workforce and customer base. Mr H. Brown, who had followed Knight and Lee from Whitely’s, stepped up to assume directorship. Under Brown the business continued to prosper, until the John Lewis Partnership stepped in and bought the business, in their provincial expansion plan in the 1930’s.