The difficult years after the War 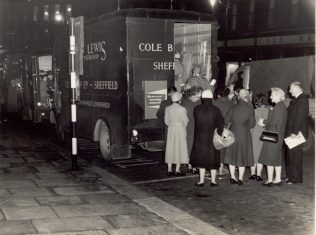 Cole Brothers benefited hugely after the war from being one of the few buildings in Sheffield city centre to completely avoid damage during the Blitz. This is not to say that it did not experience difficulties. For example, the fuel crisis of 1947 enforced strict restrictions on lighting. However, in this time of extraordinary difficulty, as Britain and the rest of the world rebuilt itself, the branch continued to provide an exemplary service to customers.

In the early 1950’s, ‘Cole Brothers’ continued to progress admirably despite ongoing difficulties, a feature that had been so since before the Second World War There was also a move to rationalise and centralise the structure of the companies within the partnership. As a result, some branches began to trade under the Cole Brothers aegis, although they retained their own names. A sports park at Norfolk Park had also been acquired, another clear example of how providing facilities and recreation opportunities for all partners was at the forefront of the Partnership ethos.