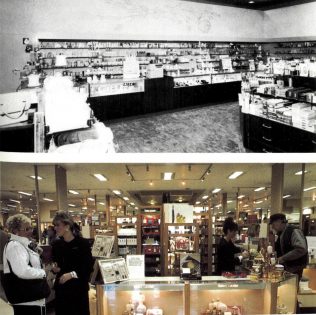 zoom
The same department separated by 25 years. What a difference!

The 1980’s and 1990s saw a relative decline in fortunes for the store, as the city as a whole suffered in less than favourable economic conditions. A new out of town shopping centre also helped to dampen spirits, as did the disruption caused by the installation of a new super-tram.

Despite this, by the end of the 1980’s, the shop was barely recognisable from its original guise upon opening in 1963. By the end of the 1970’s the decor had undoubtedly become a shade or two dated. This was the main reason behind another refurbishment, which took place around the dawn of the next decade. The store stocked all the latest in modern technology, including the latest fitted kitchens and running machines, further demonstrating to its Sheffield customers just how far Cole Brothers had come.

Despite undoubtedly possessing the precision, passion and efficiency of a Partnership department store, Cole Brothers retained a family feel and a distinct identity. This was down to the fact that even by the late 80’s, 60 per cent of shop employees came from within 6 miles of the store. By October 1995, work on the intercity supertram was complete, and steps were taken to restoring prosperity.