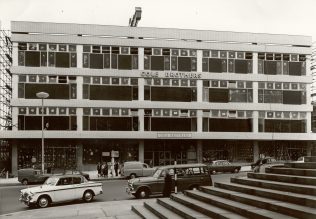 On the 26th March 1960, the Gazette announced to Partners the intention of the partnership to expand Cole Brothers by moving the shop to a new site. It had become increasingly clear that the old properties from where Cole Brothers had originally functioned, were no longer suitable for a company aiming to be at the forefront of modern retail. A decision was swiftly taken to rebuild Cole Brothers on the Barkers Pool site. The old site was promptly sold in 1962 for a cool £1,000,000.

Moulding the future of Sheffield

The old Cole Brothers site had become a Sheffield institution, and for many people it lived poignantly in the immediate memory. The new building, which was to sit impressively opposite the city hall, was intended to trigger the development of a new shopping centre, and new roads into the city. And so it was that John Lewis was hoping to mould the Sheffield of the future. The new Cole Brothers site on Barkers Pool, was opened on the 17th September 1963. Customers were extraordinarily keen to get inside and have a look at what was on offer!

Understandably, there were initial mixed feelings about the big move, but doubters were soon proved wrong. The partnership continued to expand. In 1974, the offices of the store moved into Barkers Pool house. The two sites were eventually connected together by bridges, making them no longer separate entities. A warehouse was opened at Tinsley in the same year. Then, in 1977/1978, a site was purchased on Cambridge Street to house the Cole Brothers sports and toy departments.