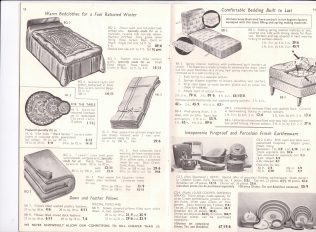 One of the most famous 20th century ceramicists was Susie Cooper.  Born in 1902 in the heart of the Potteries, Burslem in Staffordshire, Susie became know for her stylised designs which were available in John Lewis from the 1930s onwards.  When she set up her own business Elvie Macdermott, the China buyer placed the largest order the newly formed business had ever received – two banded designs call “Wedding Ring”.  Queen Mary was amongst those who bought a set at the British Industries Fair.

One of Susie’s most popular designs Polka Dot was available in green (897), blue (898) and tangerine (896).  A coffee pot and set of cups and saucers in the latter can be seen at the Heritage Centre.  This set comprises some seconds marketed with only the John Lewis stamp, or no stamp at all.

Another popular design, Dresden Sprays, was purchased by Edward VIII for Mrs Simpson.  This design was available not only in china but on other merchandise too.

Susie’s relationship with the Partnership continued until her business was acquired by the manufacturers of Tuscan Ware, later purchased by Wedgwood.  She continued designing  until the mid 1980s when her contribution was recognised with an honorary doctorate by the Royal College of Art.