You are here: HomenextPeoplenextCelebrities great and smallnextThe fire at Windsor Castle

The fire at Windsor Castle 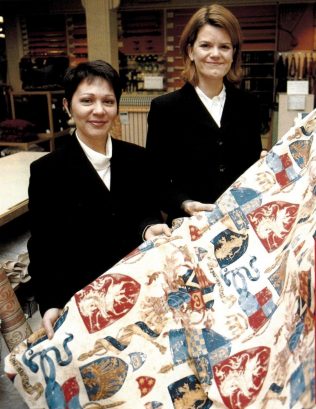 On the 20th November 1992, a fire devastated Windsor Castle. Hundreds of years of history burned, and the entire landscape was blackened by thick billowing smoke. The old building aided its own demise, fire spreading quickly via the roofing. The people of Windsor could do very little but watch on. At 3pm, the Queen arrived to pick up some of her personal belongings, her sadness was evident. Fire-fighters battled on into the night, finally beating the blaze at 02.30am. Despite their hard efforts, they had been powerless to prevent damages of over £35 million. In total, 115 rooms were destroyed, the Brunswick and Prince of Wales tower had been totally obliterated.

Caleys at the centre of restoration

Restoration of the castle took five years. The Queen had declared her wish to use warrant-holders as much as possible in the refurbishment. This was fantastic news for Caleys. The Partnership’s smallest department store was asked to provide wallpaper and fabric for staff bedrooms in the Brunswick tower, and blinds of the Prince of Wales Tower. Tasked with providing these areas of the castle with a light and airy feel, the perfect co-ordination of wallpaper and fabrics was suggested to Major Jim Eastwood, Superintendent of Windsor Castle, by Denise Rawsthorne, Furnishing Advisor and Claire Critchclow, Special Shopping Manager.

Thusly, over 2,700 feet of wallpaper and 300 metres of upholstery fabrics were supplied by Caleys. Denise and Claire were invited along to special ‘thank you’ reception at the Castle, where they got the unique opportunity to speak to the Queen, Prince Charles and Prince Andrew!