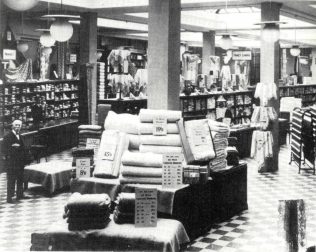 zoom
A photo of the interior of Jessops, with Mr Dickinson standing on the far left hand side. Taken in the early 1930's, Mr Dickinson was at this point 84 years old

At the age of 56, William Daft took Zebedee Jessop into partnership in 1860. Six years later and Daft had sadly passed away, and Zebedee was left to run the business by himself. However, despite the death of his partner, Jessop would not completely lose the Daft family connection.

In 1868 at a measly 16 years old, William Dickinson niece of William Daft, started his first day of work at Jessop and Son of Nottingham. He would work for the company for 72 years, making him by far and away the longest serving partner in John Lewis! Like most workers in their late teens, Dickinson started out as a porter, delivering parcels to the shops numerous clients. He would have also undertaken some simple administrative duties. Being constantly in the shop and around the other workers soon evolved Dickinson into a dab hand, and he soon rose through the ranks. He would become head of the Linen department, as well as a buyer.

In May 1940 at the tender age of 87, Dickinson finally left when his eyesight began to fail him, in later years going completely blind. Even after his retirement, Dickinson is remembered for coming into the shop a few hours daily, and bowing the customers in and out!