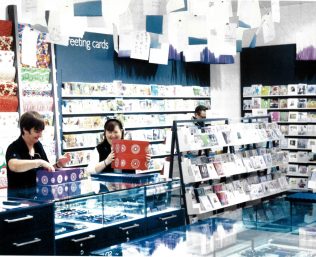 zoom
The sharp, sleek interior of John Lewis Milton Keynes, after the completion of Project Mosaik

In 2004, both John Lewis and Waitrose celebrated 25 years in Milton Keynes. It was a major milestone that had seen much change in the intervening years. But more change was on its way. With the population of the city set to double in size as a direct result of a major housing development program, the Shopping Centre and the Partnership needed to act. To meet growing demand, five day trading was changed to seven day trading. A ten year long £400 million plan was also afoot to improve the shopping centre. Retail, leisure and sporting facilities were also set to undergo considerable refurbishment.

It was in this environment of prosperity that ‘John Lewis’ announced further refurb plans. ‘Project Mosaik’ was given the go-ahead in the early months of 2012, and work was started almost immediately behind the scenes. By the end of the year, the rejuvenation was complete. Project Mosaik had completely transformed the whole shop.

The revamp saw changes to every single department. More than 30 multi-channel kiosks were installed along with in-store collection points. The shop also featured a 300 seat newly refurbished Place To Eat, a table service Espresso Bar and a Beauty Retreat. The shop was the first and only branch at this time to trial the Home Vision 2 strategy, part of John Lewis to lead in home. The way stock was displayed and sold was thus turned on its head, the entire way that the selling space was used was altered, almost beyond recognition.