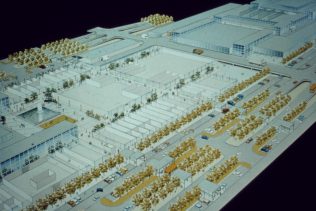 Milton Keynes was the ambitious product of a government initiative to create new towns, in order to alleviate rapidly increasing population growth in Britain’s biggest cities. The project had its roots in the years following the Second World War, and an initial move by the government to disperse the population that had condensed around London. Towns south of the London greenbelt were rapidly expanded and rejuvenated in order to accommodate relocating Londoners. By the late 1960’s, it had become apparent that more new towns were required to combat population growth in the areas north of London. Milton Keynes, to be located approximately halfway between London and Birmingham, would be the largest of these proposed new towns. Work began in 1967.

Milton Keynes was an amalgamation of four existing towns – Bletchley, Stony Stratford, New Bradwell and Wolverton. A total of thirteen villages were incorporated into the Milton Keynes umbrella; one of the smallest villages gave the new town its name. The intentions for the town were grand. At the very heart of the settlement, a shopping centre of vast proportions was planned to be the town focal point. With more than 160 proposed shopping units, and a staggering 14 covered arcades, the shopping centre at the time would become the largest in Europe!