Proposals presented to the Partnership 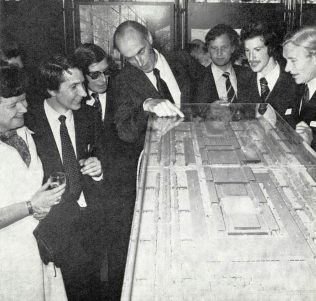 The Partnership asked to lead development

Britain’s proposed largest single integrated shopping centre, which would be comprised of more than one millions square feet of gross leasable space, was in need of a flagship store to attract customers. In the early 1970’s the Government sponsored Development Corporation approached the John Lewis Partnership about the building of a new department store, to act as the much needed shopping centre anchor. Despite some initial reluctance from the Partnership as options were carefully reviewed, an agreement was eventually reached in June 1975. The Boards of the Partnership and the Development Corporation had reached an agreement. In the ‘Chairman’s address to the Central Council’, dated the 22nd May 1976, the Partnership announced its intentions to its Partners.

By this point, work on Milton Keynes, directed by the Development Corporation, had been underway for a number of years. The shopping centre was due to be opened in early 1979, and John Lewis Milton Keynes would follow suit at the latter end of the year. The Partnership had identified the opportunity to build a brand new store to the latest specifications with limited restrictions. The Partnership would be responsible for shaping the new city’s retail and recreational landscape, servicing and and providing for its 250,000 proposed inhabitants.