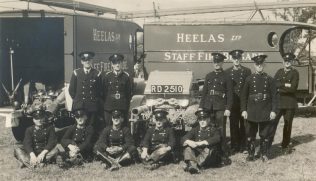 At the outbreak of war in 1939, Heelas of Reading was doing rather well. A takeover bid by the John Lewis Partnership in 1937 had stalled, and this would not be resurrected again until the 1950s. However, the Partnership did not entirely lose out in Reading. In 1940, despite the rages of war, the Partnership acquired 15 new branches, one of which was A. H Bull Limited of Reading.

Upon the outbreak of War, Heelas lost a significant amount of men to active service. Reading suffered considerable damage to the city centre during the Blitz, and although the Heelas department store avoided the bombs, it did not escape entirely. In 1943, a garage belonging to Heelas was partly damaged by a bomb. Undoubtedly a set-back, it was however hardly the catastrophe of John Lewis at Oxford Street. Throughout the War, Heelas’ fire brigade served the local community admirably, assisting countless local businesses and communities with their own wartime difficulties.

Immediately after the war, Heelas hit turbulent waters, and in 1947, the store was acquired by a Charles Clore.