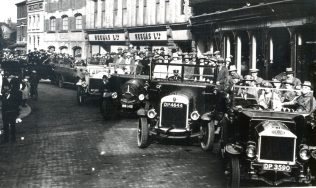 By the end of the century, Heelas had substantially developed from its initial drapery based beginnings. It featured departments containing both ‘things to wear’ and ‘things for the home’, the skeleton of the modern day department store. In 1897, Heelas Sons and Co Ltd registered as a public company, with a nominal capital of £86,000. By the 1900’s, large factories were in operation, constructing most of the goods of the shop, an indication of just how a large Heelas had become. The shop underwent a large rebuild in 1907. Both John Heelas Senior and Daniel Heelas died in 1910, and left behind a company burgeoning with success and opportunity. !

Heelas’ removal and storage departments had for many years been highly important, not least because of their own power to attract customers to the Furnishing Department. By 1934, a five storey furniture depository was required to be built to meet ongoing demand. The store by this point also had its own Fire brigade. Heelas’ considerable success had not gone unnoticed. In 1937, two years before the outbreak of World War Two, the John Lewis Partnership launched initial takeover discussions with the department store.