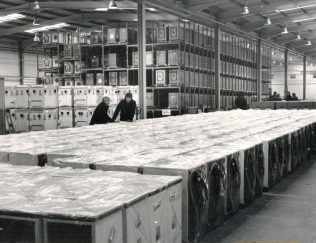 zoom
The interior of Blakelands, 1980

In May 1979 the Gazette announced to purchase of a warehouse at Milton Keynes in which it was planned to house heavy electrical appliances allowing them to be sent directly to customers on a system known as “sample sales”. In the past large kitchen appliances had been sent to department stores and then delivered by local teams, but this new warehouse provided the opportunity for goods to be sent directly to customers, avoiding the possibility of damage and increasing the speed at which the deliveries could be made.

Unlike Stevenage which was limited in height by its unusual roof, Blakelands could incorporate racking up to 22 ft high and that, added to its overall size of 100,000 square feet made it a very large and impressive addition to the distribution portfolio of buildings.