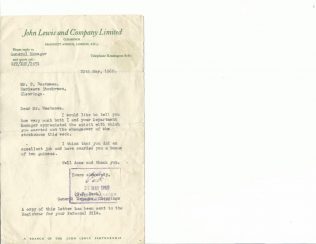 The following testimonials have been provided by Trevor Phillips, Partnership Council President, and Roderick Westmaas whose father worked as a Partner within John Lewis.

“The background is that Rod Westmaas is an old schoolmate of mine. His parents came from what was then British Guiana in 1958; he is a few years younger than me but like me, he returned to Guyana to go to school, which is how we first met.

He told the story below at a recent event where we both spoke; I found it immensely touching, and made me think what an extraordinary gesture it must have seemed at the time, given the way that that generation of immigrants were treated elsewhere. It speaks volumes for the enduring values of the Partnership. I am also reminded that Clearings would have been within walking distance of the site of the Notting Hill riots just a couple of years earlier.”

“The John Lewis story my late father told was that he was simply a cleaner at John Lewis doing the best job he could do. This, we believe, was his first job in London. I am not sure when he actually started there but I would guess it was shortly after he arrived on the Bookers ship in 1958.

Growing up he would always say to myself and my siblings that when he first came to London (having left British Guiana as a manager of a prominent sawmill in the Pomeroon River) he took a job sweeping floors at John Lewis. He would emphasis to us that no matter what job you do, do it to the best of your ability, just as he did. He would say that his floors were spotless. As a result he received an extra two guineas in his pay packet.

My father went on to become a post office inspector but always looked back with pride on his John Lewis days. So much so when we moved to Streatham in 1961 he had hoped, in vain, to get a job at the John Lewis affiliate, Pratts on Streatham High Road.

Attached is the letter which my brother Huw had rescued from amongst Dad’s possessions when he passed. The letter must have meant a lot to him for him to keep it for all these years.”

This information has been shared with the full permission of Roderick Westmaas and his siblings Gillian and Huw.