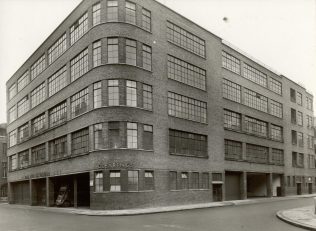 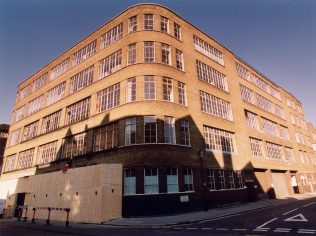 In 1933 the Partnership made the decision to construct a purpose built warehouse and despatch building just a short walk from Peter Jones.  The pressure on the existing despatch department was too great and space was also needed for departments and workrooms which could be based outside the shop.

The island site covering 22,500 square feet was purchased for £28,000 and work began on the first three floors.  It was constructed out of London stock brick with a steel frame and although the interior was not architecturally pleasing to the eye it was a very useful space and by the end of 1935 200 Partners worked there.

This lack of design was not lost on Spedan Lewis.  In particular he criticised the canteen saying

“If you are catering for cattle, you give them cleanliness, warmth, air and the right food properly prepared and you give them nothing more.  That is exactly what we have done in that canteen …  The Partners are not cattle and from the standpoint of commercial efficiency, quite apart from any other motive, it is not really clever to treat them as if they were”.

By 1936 the building had exceeded all expectations with workrooms as well as despatch and other support functions.  Another adjacent site was purchased and work began on Clearings II.   During the excavations for this new warehouse a large tooth was discovered which turned out to be that of a prehistoric mammoth!

After the War more departments moved into Clearings but by the early 1960s the decision was made to build a new state of the art warehouse in the new town of Stevenage and many Partners left Chelsea to start a new life north of London.

Clearings III was converted from an old Harrods warehouse in 1971 but the Gazette confirmed it was to be sold for development in 1989.  The other Clearings buildings continued to be used until 2000 when, as part of the refurbishment plan for Peter Jones, a large area of the building was converted into selling space known as PJ2.  Following that, an announcement was made of the relocation of the JL IT team to Chelsea in 2013 and planning permission for the site was granted by the local council the following year.