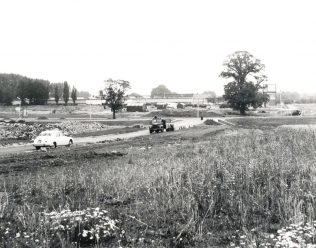 zoom
The clearing of the site for John Lewis Stevenage 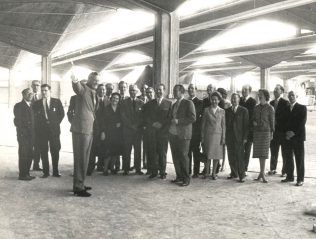 zoom
The interior of Stevenage Warehouse, complete with Partners, 1963 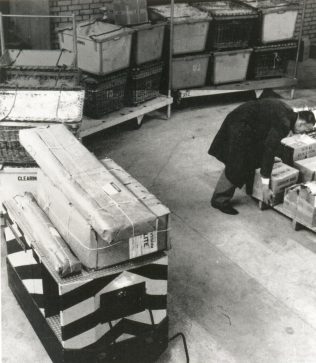 zoom
The robotug and trailers at John Lewis Stevenage, 1964

By 1961 it was becoming clear that the department store trade had outgrown the Clearings warehouse in Chelsea. Experience had shown that the most efficient way of handling goods on a large scale was in a single storey building which would have been expensive in London, so the decision was taken to look at sites outside the capital.

A green field site in Stevenage was identified and construction began in March 1962.

The warehouse and office building totalled 180,000 square feet and was designed to make use of modern technology including electrically powered “robotugs” to carry goods around the building.

The General Office processed all paperwork but one of the major advances was the installation of the Partnership’s first computer at Stevenage in 1963. Mainly designed for stock control this huge piece of equipment took up a whole room. In addition, the Central Payments Office was set up there in 1965 along with other non-selling departments including Company Registry and Internal Audit.

The branch now employed 225 Partners, 60 of whom had transferred from Clearings working mainly in the warehouse and assisting with the new extensions which were added to the original building over the next few years. One of the last major extensions, Stage V, was completed in 1979 but the branch continued to provide a valuable service to the supply chain until 2011 when stocks were transferred to other more modern distribution centres and the building was closed.

It has since reopened to cope with the increasing demands of the distribution side of the growing John Lewis business, continuing a presence in the town which has now been in place for over 50 years.