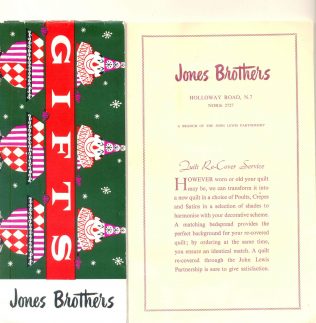 zoom
A Jones Brother promotional leaflet from the 1950's 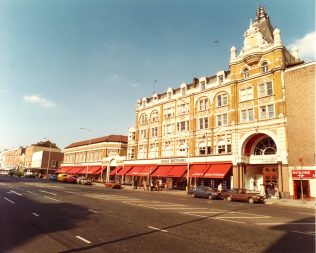 zoom
The exterior of Jones Brothers in 1985

During the years of the Second World War, Jones Brothers was lucky enough to come through unscathed. There were however a number of restrictions on the shop, as there would have on any retail outfit during the period. One the biggest was the fact that due to the sheer size of the Jones Brothers premises, the wartime government requisitioned part of the property for their own urgent usage. As can be imagined, the knock on the effect for the rest of the shop was substantial. Not least, space would have been at an absolute premium!

Under the Partnership, Jones Brothers had to wait until after the war before any substantial changes were made. In 1950, the food hall that had been closed by the war was reopened, and in the same year, property that had been requisitioned by the government in 1939 was handed back. This prompted years of prosperity and growth, and there were numerous renovation projects, including the 1963 project to extend the food department, which had been made entirely self service in 1957.

Jones Brothers stays rooted at the Partnership moves on

Despite enjoying a strong local trade and many loyal customers, the Partnership announced its decision to close Jones Brothers in 1990. With the opening of John Lewis Kingston set for 1990 and John Lewis Brent Cross already doing fantastic business less than twenty minutes away, the need to have a department store on Holloway road was becoming increasingly limited. On the 21st July 1990, Jones Brothers of Holloway closed its doors for the very last time. With plenty of fond memories to take forward with them, it was undoubtedly the end of a chapter, but equally was sure to be the start of something new.