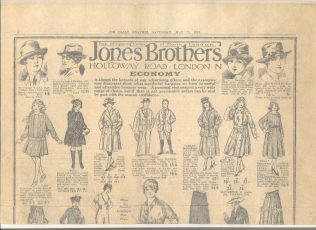 zoom
A Jones Brothers advertisment from 1918

In 1906, Jones Brothers and Co Limited was formed. This switch to becoming a limited company would be of particular importance in 1910, but not in a way that many could have imagined. A label inside a pair of men’s pyjamas bought from Jones Brothers correctly identified the company as Jones Brothers Limited. This was to be the resounding piece of hard evidence that eventually convicted Dr Crippen of a murder that he had previously so venomously denied. In the years following, trade for Jones Brothers began to slow down.

In an advertising campaign from 1918, it was describes as the ‘shopping centre of North London’, however 7 years later and the shop had had to change its tact, describing itself as ‘the cheapest’ shop in the area. One year later, in 1926 and the business was sold to Gordon Selfridge, becoming part of the Selfridge Provincial Stores (SPS) group.

In line with Selfridge’s way of shop-keeping, all formalities were dropped. Expansive and often expensive publicity campaigns were initiated. These included the advertising of sales and clearances, as well as frequent guest appearances from local and nationwide celebrities. These were all attempts to re-establish Jones Brothers’ primacy at the forefront of North London shopping. They were mildly successful. By 1940, Selfridge opted to return to America, and subsequently sold his SPS stores to the John Lewis Partnership.