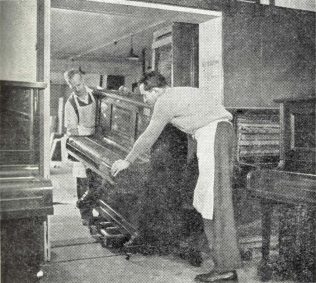 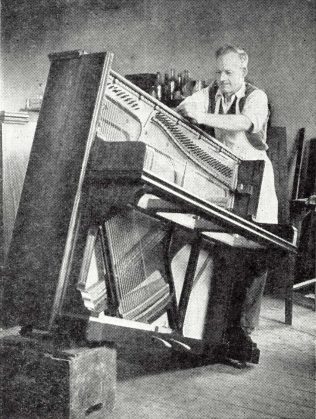 In 1957 The Gazette reported that Partners were in some confusion as to whether pianos were included in the assortment or not! Customers in some Branches had been told that the instruments were not sold by the Partnership.

At this time Jones Brothers, Holloway Road not only sold new instruments but also bought second hand pianos for reconditioning and in some cases fully rebuilding in the Partnership’s on-site Workroom.

Messrs Hall, Parsons, Smith and Forester were responsible for buying, stripping down, refurbishing the felts, hammer action and keys and repolishing the cases.

“During the war new pianos were unobtainable and second-hand ones a rarity. At one time Jones Brothers had two passed to them, both badly damaged in bombings. With great ingenuity parts of each were used in building one, which was a memorable success.”

Purchase of a second-hand piano from the Partnership was followed up with a personal visit by the Section Manager to see that all was well and that the piano had been placed away from sources of heat and moisture. Finally customers received a free tuning one month after purchase.