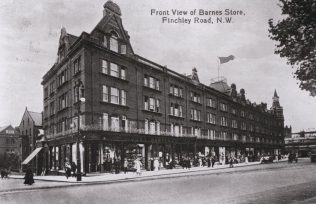 John Barnes has gone through a number of changes since opening its doors in 1900. The latest of these is an extension to the branch which opened on 29 November 2007. Here we take a brief look at the shop’s history.

When John Barnes first opened its doors it was a purpose-built department store financed by a group of well-established retailers including Mr Owen Owen, William P Jones of Jones Brothers, John P Jones of Dickins and Jones, Edwin Jones of Bon Marche in Brixton and the chairman – Mr John Barnes.

Sadly John Barnes himself never actually saw his mammoth project through to completion. He was drowned in a storm off the coast of the Channel Islands whilst holidaying on the ‘Stella’ the previous year.

The shop consisted of two selling floors with staff accommodation on the third and fourth floors. The staff enjoyed ‘dining room, sitting rooms, library and bedrooms… which for comfort and cleanliness would do credit to a first-class hotel’.

By 1926 sales had rocketed to £269,311. Gordon Selfridge jumped at the chance to take over the shop and it became one of his Selfridge Provincial branches until it was acquired by the Partnership in 1940.

Whilst under Selfridges’ ownership the shop was completely rebuilt and the shop we see today was officially opened in 1935. It continued to trade as a department store until 1981, when the decision was taken to turn the building into one of the largest Waitrose branches in the country. The rest, as they say, is history.

Follow this link to visit the Waitrose website (www.waitrose.com/johnbarnes) and find out more about the branch, including opening hours.