The steps towards Partnership takeover 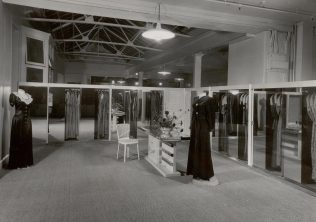 Despite avoiding material damage during the Second World War, it became obvious that an entire shake-up was required in order to secure Bainbridge’s future in a constrained post-war environment. Mr George V.M Bainbridge, great grandson of Emerson Muschamp, came back from war service and was immediately appointed as one of two Managing Directors of the business.

Eager to revive the business to its former glories, he started the so-called Bainbridge Renaissance. A number of departments that had been closed down during the war were re-opened and renovated; some entirely new departments and some concessionary departments were also opened. For example, in 1947 ‘Sportsman’s Shop’ was reopened, and in that same year a Kodak camera department and a travel burueau saw the light-of-day.

Considerable in-house training facilities were developed and subsequently made available for staff, and the in-house magazine, The Albert House Review was restarted.

The Partnership takes interest in Bainbridge

These considerable alterations had a significant impact on the shop’s fortunes, but it became apparent by the early 1950’s that backing by a larger company was needed in order to guarantee future financial success. Little surprise therefore that soon afterwards, the John Lewis Partnership was approached regarding the takeover of Bainbridge.