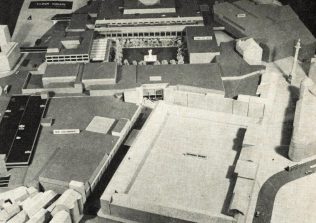 The Partnership continues to make changes

Throughout the 1960’s, many of the old departments that had characterised the original Bainbridges store, fell by the wayside as the Partnership aligned the shop with its other branches. The substantial food hall and the hairdressing department were both closed. The move to close the hairdressers was a Partnership-wide decision, and similar departments at other stores were also closed.

Out with the old, in with the new

As this era of old faded out, a new future for Bainbridges was beginning to emerge. In October 1970, an announcement appeared in the Gazette, explaining how the Partnership was engaged in negotiations to re-site the department store to a major new shopping centre. This new centre was to be built in Eldon Square, a new shopping development north of the existing site.