The acquisition of Bainbridges into the John Lewis Partnership 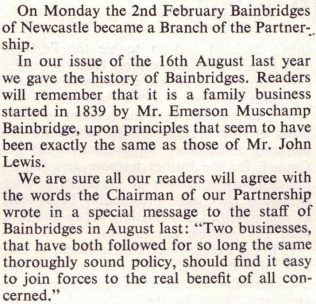 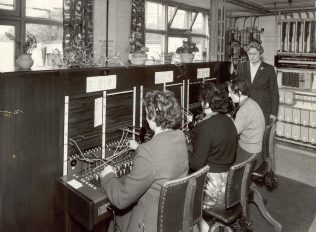 zoom
The new telephone switchboard opened at Bainbridges in 1957

On February 2nd 1953, Bainbridge of Newcastle was acquired by the John Lewis Partnership. The business was a focal point of Newcastle, a landmark that had many local customers as well as many who travelled some distance for the department store’s remarkable variety.

Despite this wide customer base, financial constraints had meant that the store could only have a future if it had allied itself with a larger organisation. John Lewis was this organisation. And it turned the shop’s fortunes around.

Opportunites to expand and modernise

Just one week after the Partnership takeover, positive changes were already underway. In that week’s Gazette, Bainbridge topped the Partnership’s trading column, where it would reside for the majority of the year.

With the backing of the Partnership, there was now capital to both expand and modernise the shop. Whole departments were refurbished, and various steps were undertaken to bring the shop in line with the other stores in the Partnership. This would allow the store to perform consistently to Partnership expectations. These steps included installing a new telephone switchboard in 1957.