You are here: HomenextHead Office, Distribution, Building, Manufacturing, ITnextITnextThe growth of the computer in the Partnership, 1970-1989 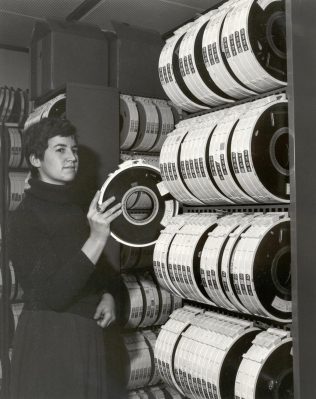 zoom
A Partner with some electro-magnetic tape, essential equipment for the early computer, c1970s 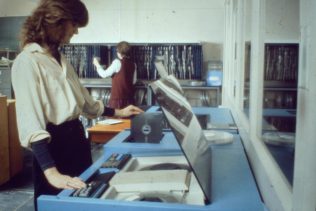 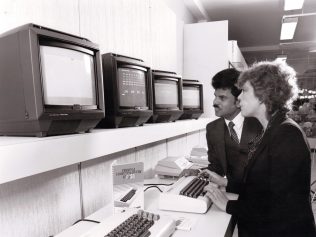 After its auspicious start at Stevenage, the computer grew in popularity, both internally and externally of the Partnership. Increasingly, it was becoming an everyday object, although very much embraced by some and feared by many. In the Gazette of 23rd January 1971, the publication made the announcement that it would be starting a computer column declaring that

Most of us tend to regard the computer as a strange beast that mutters to itself in corners[…] Below, a special correspondent – who has some knowledge of the beast – introduces what we hope will be a regular series giving news of the computer’s activities.

Earlier in the year, new John Lewis Head Offices were opened at 12 and 14 Clipstone Street, in order to deal with the continued growth of the business. Delivered to the new offices was one brand new computer, and another computer already used in the Partnership. The new computer had twice the work capacity of the older model, thus demonstrating how quickly advances were being made in the field!

By the 1980’s, rapid advancements in technology meant that the size of computer components had dramatically decreased. Remarkably, more data could now be held on components and software that was vastly smaller in size. Computers had already become a business necessity, but now they were turning into a commercially viable product. The personal need for one was growing all the time, and the fact that it could fit snugly into a corner of the room, rather than occupying the entirety of it, meant public interest in the computer soared.

The rise of the computer department

Little surprise then that the 80’s was the decade in which computers to buy first appeared in the department stores of the John Lewis Partnership. When the brand new Bond’s of Norwich re-opened as a Partnership store in 1984, the new computer department took pride of place. A technological revolution was taking place. And the Partners were feeling it too. For in offices everywhere, a ‘beast’ was installing itself into the corner of the room, absolutely intent on making everyone’s lives easier.