How John Lewis ended up in prison 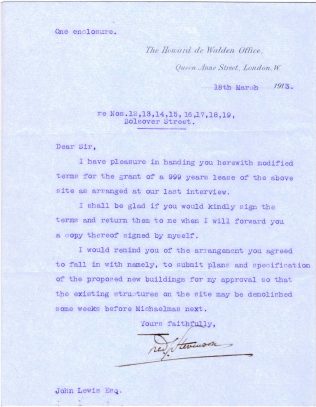 zoom
A letter to Baron de Walden from John Lewis, from March 1913

The dispute with Baron de Walden

Mr Lewis undoubtedly got the new century off to a bad start. In 1902, a legal dispute flared up between him and one Baron de Walden that would last for over twenty years. Lord Howard de Walden was the ground landlord of the estate on which John Lewis was located, and the two argued bitterly about what Mr Lewis could and could not do with his shop.

Characteristically, Mr Lewis refused to back down. At one point, he was sent to prison at HMP Brixton for three weeks for contempt of court in 1903.

The dispute rolled on. In 1911, Lewis was sued by de Walden for libel, after large placards were erected in the windows of John Lewis voicing Mr Lewis’ disgust at the whole affair (one sentence appears to call de Walden an accident at birth). Although there was no lasting impact on the business, clean-cut competitors such as Selfridges were beginning to appear on Oxford Street. Mr Lewis was also beginning to frustrate his two sons.

Peter Jones was a failing store when John Lewis purchased it in 1905, and despite considerable effort, he had little success in reversing its fate throughout the early 1900’s. After recovering from his serious riding accident, John Spedan Lewis increasingly pushed his father to be allowed to spend more time at Peter Jones. His father pushed back, but eventually allowed Spedan to go down to the shop, though only after he had finished his work for the day at Oxford Street.

Eventually the two fell out entirely. In 1916, Spedan left Oxford Street altogether, and went to take over Peter Jones. Here he implemented a number of things that put the company on the road to a Partnership. For example by 1919, Spedan had set up the first Staff Council a year after the first ever edition of the Gazette was published!