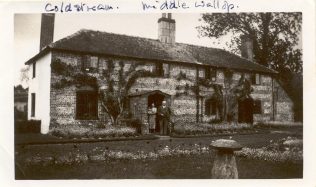 Most of the Trewin family lived in a small area east of Bude. Places like Michaelstow, Kirkhampton, Poughill, North Hill Launceston, Lewannick and Camelford, frequently crop up.  His younger Brother Henry, born 1860, had joined him in the business by 1891, according to the Census.  Arthur had been a Drapers’ apprentice when he was 16 years old, (1871 Census.)  He did not marry but he was a family man, gradually bringing his widowed mother and unmarried sisters to Watford, to assist him with the business.

All the Trewins were agricultural labourers and farmers except for Arthur who had broken the mould, and his cousin Frederick Thomas Trewin.  He was a son of Thomas Trewin, (Arthur senior’s brother,) who had trained as a veterinary surgeon and had joined Arthur in Watford in 1900.  Firstly he lived in Queens Road with Arthur at the shop premises with the same telephone number as the shop and then moved his vets practice in 1920, to Essex Chambers, Clarendon Road as Trewin & Barr.  Subsequently he joined with Mr Gale and moved to Parkside, Cassiobury Park, which is still a vets practice today.

Family Names
Arthur Trewin’s family contains surprisingly few surnames, as years ago Cornish families tended to marry within a limited area.  Often the man would leave his village, go to a large city and then return to marry a local girl.   The Trewin family therefore married   into the Brown, Peters and Stanton families.  Arthurs’ mother Jane Trewin nee Bastard (an old Cornish name,) came from Michaelstow and died in Watford in 1892.  The Trewin name goes back to John Trewin (sometimes spelt Treweene) 1480 -1520.  I  have  traced him directly to Arthur Trewin of Trewin Brothers.  One of Arthurs’ unmarried sisters, Elizabeth, came to help him run the shop and married in Watford in 1895, one Francis Northey, a farmer from Truro.  She went back to Truro to be a farmer’s wife.  He was 40, she 47.

Houses in Watford
From the telephone directories of Watford, we learn that Henry moved out of the shop premises in Queens Road and into his own house – Brentnor – in Derby Road in 1905.  In 1924 he lived at 86 Mildred Avenue, (now Jenkins & Co.)  Henry  moved to Morwenna, Parkside Drive in 1927.  He also had a house in Oxfordshire, Coldstream at Middle Wallop.  This house is not listed in the telephone directory until 1935.  Arthur meanwhile moved to Brentnor, Derby Road in 1929.  Frederick Trewin the veterinary, lived at 12 Upton Road in 1947.