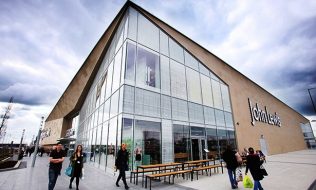 With the opening of John Lewis at Heathrow, York is no longer the newest shop in the John Lewis division. However, it is the latest flexible format branch, doubling the size of the family (John Lewis Exeter was the first, opened in 2012), and cementing a definite trend for future projects.

John Lewis Exeter was the first of ten proposed flexible format stores to open nationwide. The new format would stock edited highlights from the full John Lewis assortment, specifically tailored to individual locations. Access points throughout the store would allow full access via johnlewis.com. The new format stores could range vastly in size because of their very individual nature, and this in turn allowed for a whole range of previously untouchable locations to become available.

York given the green light

Suddenly, through this format, the historic city of York became a viable location for a new John Lewis. The Partnership had no history or coverage in the area, but historic York, complete with its affluent clientele, was an enticing proposition indeed. The continued success of John Lewis Exeter convinced the Partnership to proceed with the conception and construction of their latest flexible format department store. John Lewis York formed part of the Vangarde Shopping Park, alongside a Next and Marks & Spencer. All were due to open on the same day.

John Lewis York was opened in June 2014. The excitement in the local area was palpable, and customers were queuing outside their new store from 8am onwards on opening day! More than 600 customers passed through the doors in the first 15 minutes, and early sales included two apple macs, both purchased within the first ten minutes!

The look and feel of the shop incorporated the very latest John Lewis thinking. Furthermore, the branch also embraced many aspects of modern retail technology. This included a number of table-top tablets, dispersed around the store, allowing customers to browse the whole John Lewis assortment as they went.

In August 2014, John Lewis York was recognised for not only being the most sustainable department store to date, but also for becoming the first department store in the world to achieve a Breeam (Building Research Establishment Environmental Assessment Methodology) outstanding rating. It received the plaudit in recognition of its environmental performance and sustainability. Its ‘green’ features include a roof-mounted solar energy system, which uses the sun’s rays to store heat and redirect electricity into the shop, low-energy lighting and a Wildlife Wall.