The Partnership in Paris 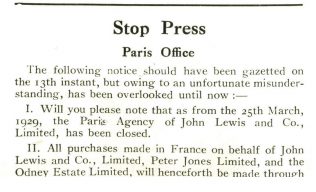 zoom
The closure notice of the original Paris Agency, 4th May 1929 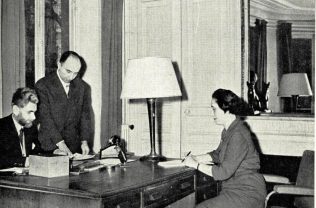 The very first movement of the Partnership abroad came in the early 1920’s, when a Paris Agency of John Lewis and Co Limited was opened in Montmartre, Paris. The purpose of the office at this time was to represent the Partnership in matters in France, including with assisting in the buying of French merchandise.

However, in 1929, the functions and the offices of the Agency were taken over by a firm called Agence Anglo-Francaise de Nouveautes. Monsieur CH Buatois, formally the Paris agent carried on working with the new company, and in this time, Partnership links to Paris remained strong.

After the Second World War in August 1945, the Partnership opened a new office in Paris. This time the premises were on the prestigious Boulevard Haussmann, site of the famous Galeries Lafayette. The purpose of these offices was to provide support and resources to buyers, seek out French merchandise, and represent the Partnership across the Channel. In August 1945, the Gazette announced that Captain A Gordon Defries would be Manager of the Paris Office.

By 1950, the operation in Paris had grown considerably, and assistance to Defries was required. This did not stop him from reaching out to Partners in England with a warm embrace. In April 1950 Defries wrote to the Gazette

‘I personally am always delighted to be able to be of any possible assistance to any Partners coming to France…There are one or two junior members of my team who tell me that they would very much like to meet similar Partners from England’.

In 1953, Oliver Jackson took over as Manager of the Paris Office. He welcomed UK Partners to France with the same open arms as his predecessor. Despite the office’s ever-growing workload, he offered help to any Partners on their way to France, by giving them local knowledge on where to stay and where to eat. By 1964, there were still only three Partners working in Paris, doing the ‘un-pin-downable’ job of representing the Partnership in a foreign country. A Gazette article set out the role of the Paris office as follows

‘Their main responsibilities are to seek out suitable French merchandise, to help Buyers on visits to French suppliers, to follow through on any orders placed, to smooth out customs problems and to see that goods arrive on time’.

The Paris Office eventually closed in 1976, in the same year that the Manager Oliver Jackson, retired from the business. It was the end of an era for all those who had ever been in contact with the office. Partners visiting the city today no longer have a Partnership outpost to turn to for help and advice, but a Partnership soft spot for the city will always remain.