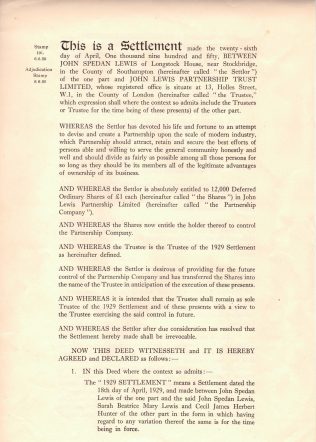 zoom
The first copy of the First Trust Settlement, 1929

Birth of the Partnership

According to the settlement, Spedan Lewis transferred to trustees his own shares in John Lewis, Peter Jones and the Odney Estate. This meant that any profits made were to pass straight to the trustees for distibution amongst the employees. Before, all profits would have been available to himself.

The business was at this point worth £1 million. In exchange, Spedan took interest-free bonds totalling £1 million, repayable out of profits over 30 years. At his point he retained complete practical control of the business for an indefinite period, through the retention of ordinary shares in the John Lewis Partnership.

Spedan Lewis brought this experiment to an end in 1950 with the Second Trust Settlement, transferring to the trustees all his remaining shares and his ultimate control.